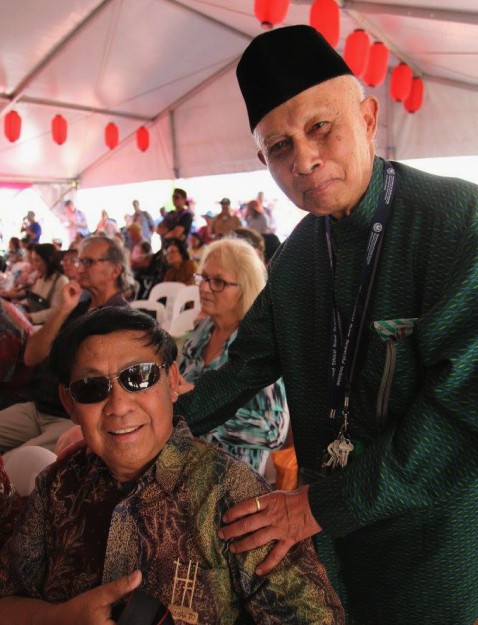 Back in 1969 a group of Indonesian Colombo Plan scholarship recipients who had made Adelaide their permanent home, got together and came up with a great idea. This idea was to create an organisation that connected Indonesians living in Adelaide and Australians who had an interest in Indonesian culture. The result was the beginning of the Australian Indonesian Association of South Australia, which still boasts a healthy membership today and is the driving force behind South Australia’s biggest annual Indonesian festival, INDOfest.

One of the founding members of the association is Bapak Tomik Subagio, who has called Adelaide home for more than fifty years and is very well-known among the Adelaide Indonesian community. Born in Solo in 1933, Bapak Subagio first came to Australia in 1950 to study engineering at the University of Adelaide. After graduating in 1955 he returned home where he married his Australian wife Janet and worked for the Department of Basic Industries and Mining in Jakarta. However, in 1968 Subagio and Janet decide to return to Adelaide to look after Janet’s sister who had been diagnosed with multiple sclerosis.

Back in Adelaide, Bapak Subagio gained employment as an engineer at the Department of Engineering and Water Supply where he worked for 24 years. Not quite ready for retirement, he then started working as an interpreter and translator which he still does today. This line of work enables him to remain in-the-know about the local Indonesian community. If you need your Indonesian drivers licence, birth certificate or wedding certificate translated, Bapak Subagio is the man to call! Even his bicycle was a form of payment for a 6000 word translation job. Appreciating the importance of a healthy work-life balance, free time is spent with friends, family and his beloved wife Janet. Preferring the simple things in life, he can often be seen riding his bicycle around the streets of Goodwood and Unley. Bapak Subagio also enjoys attending Indonesian social gatherings and other events that mark special Indonesian dates such as Indonesian Independence Day and Kartini Day, and of course, INDOfest.

Despite living most of his adult life in Australia, Bapak Subagio is proud of his Indonesian heritage and, in the absence of the Indonesian government recognising dual citizenship, has chosen to retain his Indonesian citizenship to this day.

If you happen to meet Bapak Subagio around Adelaide or at this year’s INDOfest, be sure to give him a warm hand shake and ask ‘apa kabar?’